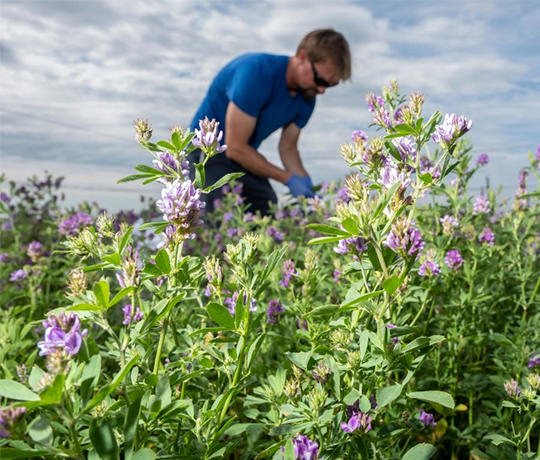 Farm management practices to promote climate-smart agriculture can contribute to increasing food security and mitigating climate change, with both of these aims consistent with the Sustainable Development Goals of the United Nations.

There is growing concern about the consequences for soil and water quality and greenhouse gas emissions from widespread expansion of conversion of dryland farming to intensive irrigated dairy farming in dry, eastern areas. There is a particular focus on Canterbury because it produces 64% of New Zealand’s primary sector exports but conversion is mainly on shallow, stony soils that are prone to leaching. On-farm solutions are required to reduce negative environmental consequences while maintaining productivity and profitability.

The basis of our research programme is that management practices that lead to increasing soil carbon stocks will favour microbiological communities that retain nitrogen for plant growth and reduce losses from leaching and gaseous nitrous oxide emissions. A focus for our research is investigating linkages between carbon and nitrogen cycling at paddock scale for dryland and irrigated lucerne. Our work is based at Lincoln University’s Ashley Dene Research & Development Station.

Figures 1-3 show instrumentation for measuring carbon and water exchange and weather variables (top left) and the installation of large lysimeters (2 m diameter, 1.5 m deep) for measuring leaching losses (lower left). The soil profile highlights the stony nature of the Balmoral soils where the coarse fraction (>2 mm) is 35-50% at depths up to 0.2 m and 60-70% at depths below 0.5 m.

Figure 4 shows net ecosystem carbon balance (NECB) for the three year period since measurements started in June 2015. The symbols S indicate the sowing date for lucerne 3 weeks after the harvest of the preceding oats crop, H times of harvests and G times when the irrigated site was grazed with dairy cows. The lines highlight the steep reductions in carbon balance associated with removal of biomass.

Despite high rates of above-ground biomass production of 7.0 and 12.8 Mg dry matter ha-1 for the year starting in October 2016 for the dryland and irrigated sites, respectively, removal of biomass for animal feed is resulting in net losses of carbon from both treatments that have increased each year. Further, the net losses from the irrigated treatment exceed those from the dryland site. We estimate that the magnitude the losses of carbon are less than 1% of the total carbon stored in the soil profile to a depth of 1.5 m.

The data from the lysimeters allow us to estimate a preliminary annual nitrogen balance for the two sites (see figure 5).

We have not yet been able to quantify nitrogen losses from volatilisation and denitrification or estimate the turnover of root nitrogen, so the findings need to be treated with caution. We conclude that, for the dryland site nitrogen fixation was the only source of nitrogen for vegetation with no net uptake from the soil. This fixed nitrogen was removed in the harvest and there was a small loss of nitrogen leached from the soil. For the irrigated site, 71% of the nitrogen required for growth was derived from fixation with the remainder supplied from soil storage. Effluent provided additional nitrogen input to the soil but this also led to leaching losses of nitrogen that were 3 times those from the dryland site. For the year, we estimated losses of soil nitrogen of 84 and 16 kg ha-1 for the irrigated and dryland paddocks. We estimate these are less than 2% of the total nitrogen stored in the soil profiles to a depth on 1.5 m.

We conclude that the current management of lucerne is designed to maximise biomass production for animal feed. Our preliminary findings show that, while losses of carbon and nitrogen by leaching are low, especially for the dryland site, there are net losses of carbon and nitrogen from the soil at both sites. This is attributable, largely to the high rates of biomass removal. Careful management of effluent applications is needed to minimise nitrogen leaching losses from irrigated lucerne.

Our research provides new insights where there are few data to estimate carbon and nitrogen cycling for lucerne growing on stony soils following conversion from dryland agriculture to irrigated production for animal feed. Such data will be helpful for refining and testing models that are being used to estimate nutrient balances for farms to meet regulations set by regional authorities.  Our on-going research is investigating the soil microbiological processes that regulate carbon and nitrogen cycling to reveal management options that will reduce losses and promote sustainable farming practices on stony soils. 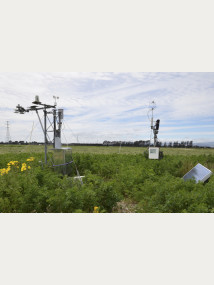 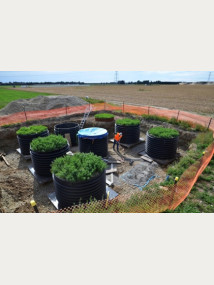 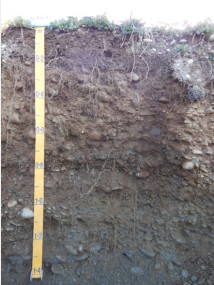 Figure 3. The soil profile highlights the stony nature of the Balmoral soils where the coarse fracti… 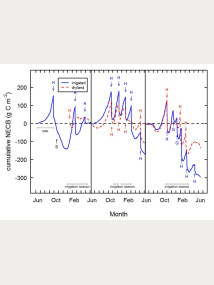 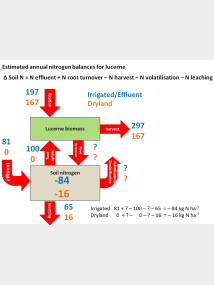