How are soils data generated?

Holes dug in the ground 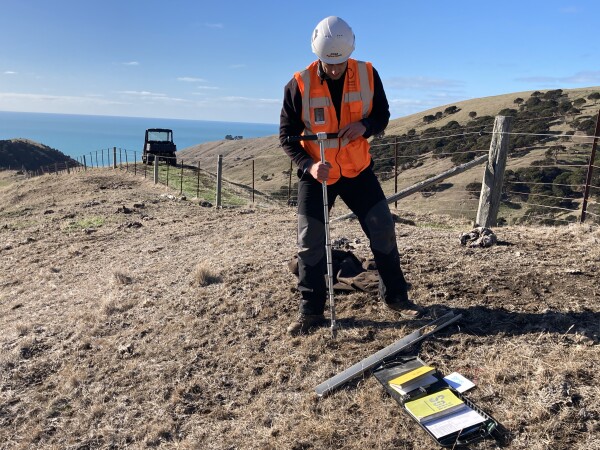 If a soil scientist has been out in the field to describe a soil, he digs a hole, notes its location, describes what he sees, makes measurements, gives the soil a (preliminary) name, and collects samples to take back to the laboratory for more detailed analyses. Most data gathered this way are stored in the National Soils Data Repository (NSDR). The physical soil samples are archived in the National Soils Archive.

The second technique used by soil scientists is called a soil survey. As part of the soil survey, the soil scientist will usually dig a number of holes, each of which will be described as before, but they will also be noting what the soil looks like on the surface and what hints there are on the surface to changes in what lies underneath. The soil surveyor will then name the different soils they see, and draw lines on a map or aerial photograph showing where the soil changes from one name to another. So a soil survey usually results in a map at a particular scale, showing the distribution and pattern of soils in the landscape, and a published report describing what the soil surveyor found and what it means. Modern soil survey maps will be digitised and stored as computer-based maps in our GIS, and we have also digitised many of the older soil survey maps. To find out what surveys have been done and where they are, visit our soil survey pages.

Over time, soil scientists have visited most parts of New Zealand and done soil surveys, some of which are very detailed and others quite simple, so we now have some knowledge about soils throughout New Zealand. This knowledge was collected and synthesized into a single data layer known as the Fundamental Soils Layers (FSL). This GIS data layer contains our best estimate for the values of essential soil parameters over the whole of New Zealand. These include such things as pH, rooting depth, and carbon content, which are very useful for national and regional environmental modelling.

More recently, we have been working to create a new soils database. S-map is a new digital soil spatial information system for New Zealand. It was originally created as part of the government-funded Spatial Information programme run by Manaaki Whenua. When complete across New Zealand, S-map will for the first time provide consistent and comprehensive national soil data layers to support applications at local, and regional to national scales. It builds on previous soil mapping by filling gaps with new mapping, and upgrading the information content and associated database to meet a new national standard. In time, S-map will eventually have national coverage and contain predominantly new digital data at a scale that resolves soil variation on hill slopes (nominally 1:50,000 scale).

Sometimes particular projects collect large quantities of soil data in a way that warrants using a special database to store the results, examples of these are the "500 Soils", SWAMP, and "Carbon Monitoring System" projects, each of which have their own databases.

Manaaki Whenua also has an interest in the soils of the Pacific and the Antarctic. Soil data for the Ross Sea region are available to view.