The NSDR is our data repository for soil observations, including soil analytical results. While S-map Online and the LRIS Portal are the most visible manifestations of our national soil datasets, the NSDR sits in the background, a less visible but crucial foundation underpinning all other datasets.

The NSDR includes the original National Soils Database (NSD), a set of 1,500 'elite' soil profiles described and analysed across the country. At present, the NSD and the 'Overseas Database' are the only publicly available soil 'point' datasets.

The National Soils Database (NSD) is a crucial part of our soil data legacy in New Zealand.
The database contains descriptions - profile data collected from soil pits - of about 1500 New Zealand samples scattered throughout New Zealand, together with their chemical, physical, and mineralogical characteristics.

Learn more about the NSD 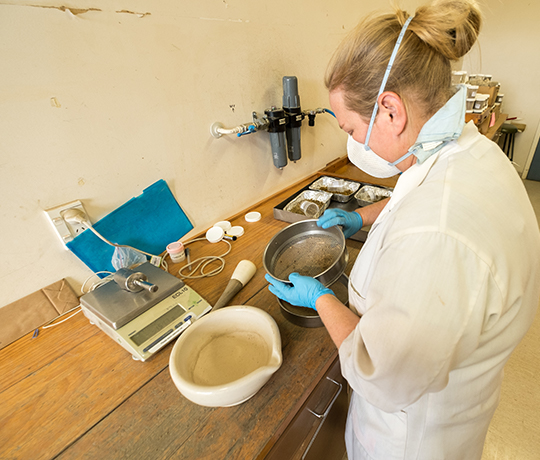 The National Soil Data Repository (NSDR) has been designed to capture the maximum level of data richness associated with observing soil phenomena. In addition the NSDR conforms to best practice metadata standards for spatial information. However much of the data stored within the NSDR is historical and for some sites data for particular properties are missing as such it is not possible to accurately populate all the metadata fields associated with particular observations. In the case of historical datasets metadata has been populated to the level of richness provided in the original data source.

The information presented in NSDR is compiled from data derived from a variety of sources which have different data accuracy and hence differing fitness for purpose. These data may not be complete, correct or up to date.

Manaaki Whenua Landcare Research advises that users should expect that ALL data contain error and uncertainty. You should therefore familiarise yourself with the information provided in the software to ensure you understand the limitations of the data presented.

Manaaki Whenua Landcare Research cannot be held responsible for inappropriate use of data and does not accept responsibility for any actions taken in reliance on the data or consequences arising from their use.

The NSDR contains records of observations of soil phenomena. The activity of collecting this data has been undertaken for a number of different purposes, as such the suite of phenomena observed and the methods used to describe and collect this data may differ significantly at different sites.

The NSDR contains records of actual observed or measured soil phenomena. Soil mapping uses the information observed at a location and through qualitative or quantitative methods generalizes the distribution of soil types or phenomena across the landscape at different scales (accuracy). As such soil observations may not match the soil mapping available for the region of interest.

The NSDR contains records for soil observations from 1959 to the present day and from a multitude of different observers. As such the method used to spatially locate a site changed over time, between individuals and between projects. Where possible the method used to capture the spatial reference has been recorded. However for many observations this has not been possible.

Classification systems, analytical suites and other methods for observing soil phenomena have changed through time. Some of the terms used in describing soil phenomena are used in multiple contexts however underlying definitions may differ. It is cognisant on the user of soil information stored within the NSDR that the metadata associated with a particular observations is consulted.

The records of soil phenomena contained in the NSDR have been collected for a number of different purposes (as noted above). Each of these activities have involved differing levels of rigour in the quality control of data collected. As such for a particular observation there may be logical inconsistencies between records for a site. The NSDR team are seeking to develop methods for highlighting obvious logical inconsistencies in the near future.

The NSDR contains free text records that have been migrated from the original NSD database. These free text records are currently what may be filtered against on the search page. As such there are filter categories that appear to be similar or the same (such as sheep farming and sheep grazing). Future work will seek to map these categories to a consistent land use mapping classification.

How to cite the NSDR and National Soils Database

If you need to cite the NSDR website or the National Soils Database (NSD) in an article or report, please use the following citations.

The National Soil Data Repository (NSDR) has been designed to capture the maximum level of data richness associated with observing soil phenomena.
In addition the NSDR conforms to best practice metadata standards for spatial information. 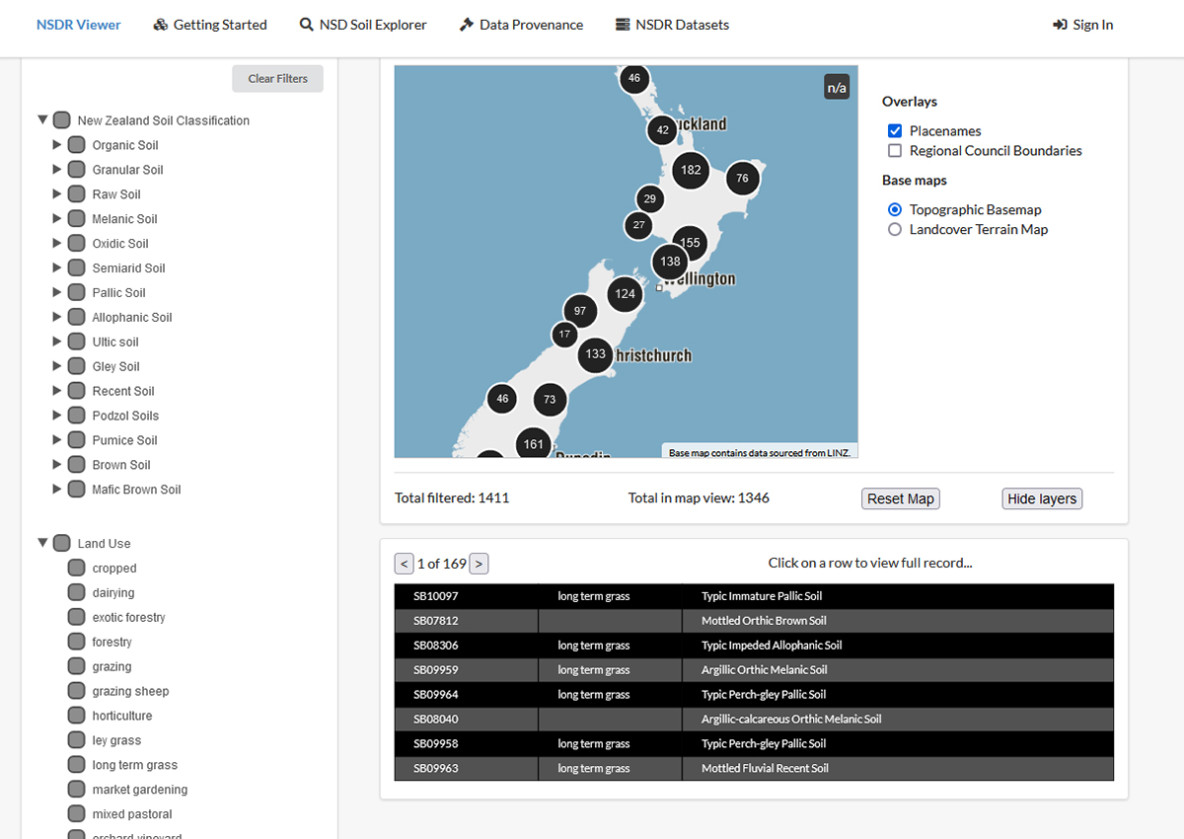 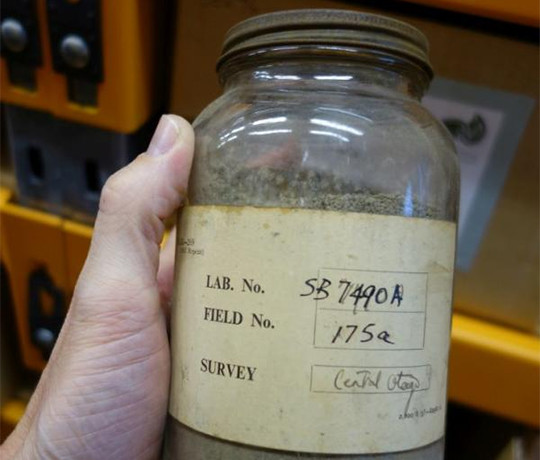 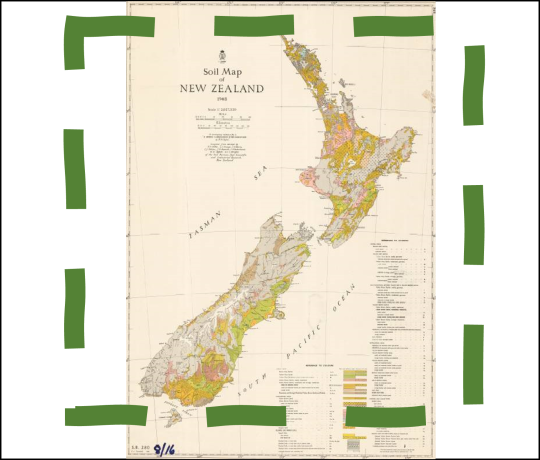 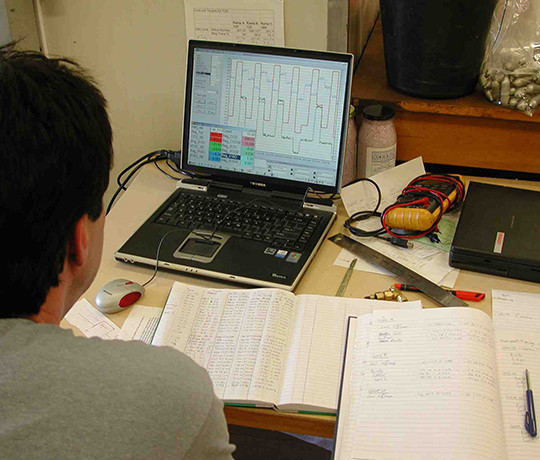 NSD - the legacy system
The NSD - first created in the 1980's - is a crucial part of our soil data legacy in New Zealand.
Learn more

See all news
Soil Horizons Issue 30
Our 'Soil Horizons' newsletter communicates our work in soil-related research to stakeholders, customers and colleagues.
Read more
The first phase of the Banks Peninsula survey is completed
A total of 426 auger observations have been made across all parts of the Peninsula.
Read more
Towards a national strategy for soil
Across Aotearoa the soil underpins our economy, our biodiversity, environmental health, and the well-being of our communities.
Read more
Getting to the root causes of soil erosion using high-res remote sensing
The project has mapped over 100,000 landslide scars across the North Island.
Read more
A first for on-farm carbon certification
Lake Hawea Station has been named as the first farm in New Zealand to have a certified carbon footprint.
Read more
New book on New Zealand soils
The first general text book on the soils of New Zealand to be published in more than 30 years.
Read more
Back to top